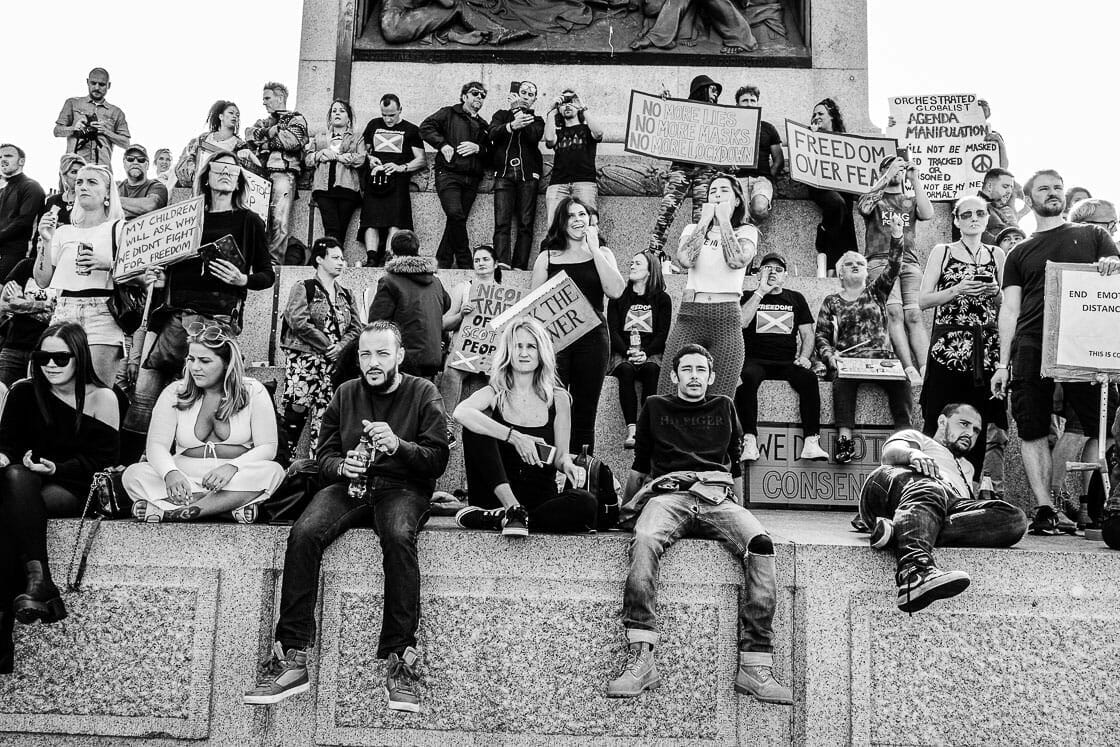 When I was in London recently I literally stumbled upon a Resist and Act for Freedom Rally in Trafalgar Square on Saturday 19th September 2020. This photo documentary is the result of me accidentally being in the right place at the right time!

Here’s a short video clip from my iPhone to give you an idea:

My Role as a Photojournalist and Documentary Photographer

My role as a photojournalist and documentary photographer is to document what I saw at this rally and protest through my photos and this blog article. No more, no less. I will never push an angle or take sides through my work. I pride myself in remaining neutral at all times.

Upon arriving at the rally it was clear from the banners on display that this was a protest by all manner of conspiracy theorists.

So much so that it was difficult to work out what group had organised it. A quick search on Google led me to this breaking news article by the Evening Standard.

The article confirmed that the Resist and Act for Freedom Rally (as I later found out it was called) had been organised by Kate Shemirani.

Shemirani has been suspended as a Nurse for her conspiracy theory beliefs. She believes that Covid-19 is a hoax and is also anti-5G and anti-mask. Shemirani has also become the face of the “Anti-Vaxxers” movement in the UK. Hence the varied turnout of protestors.

Judging by the banners on display the protesters largely comprised of the following groups:

Largely Peaceful Protest but some Trouble

It was a largely peaceful protest but there was some trouble and hairy moments too. I spoke to some of the protestors and listened to their firmly held beliefs. They were not there to cause trouble.

But there were also some troublemakers and some provocative taunting of the Police coming from the stage. Almost inevitably this whipped some of the crowd into a frenzy which resulted in an isolated skirmish and some clashes with the Police. I left shortly afterwards.

I later read that the Police eventually closed down the rally over public safety concerns and there had been 32 arrests.

Here’s a video clip from my iPhone showing the trouble kicking off:

This rally was held on the last day of my 3 day London photography trip. I was there to continue the Streets of London street photography project that I started back in March which was curtailed by the subsequent Coronavirus lockdown. I also started work on a new social documentary project. So, watch this space, as there’s more London photography posts to follow soon.

Anyway, here is my street documentary photography from the Resist and Act for Freedom Rally in London: